I slid down a rainbow, rode on the back of a giant butterfly, and hid under a mushroom during a leaf storm today.

It was exciting; it was breathtaking; and it was all in my imagination.

Too many people today ignore their imaginations. Opting to spend time that they’re not working glued to the television or computer. While I don’t wish to denigrate either of those—I myself enjoy certain television programs, and if you’re reading this, then you know I spend time on the computer posting stories to my blog—I do think most of us spend way too much time watching man-made illusions instead of listening to and watching the wondrous stories stored in our own imaginations..

Have you watched a child and wondered what it would be like to be like them—happily and easily entertained by a simple box and their imaginations? All you have to do is let go of all the pretension that you fill your life with.

Take off the stress of whether your boss is going to give the promotion to someone else. Drop the mask of being perfect, and lose the worry about whether supper is on the table on time or not. Then go outside and lie down on a patch of grass and stare at the clouds.

Is that a dog, that cloud with the fluffy tail? And is it chasing that bird soaring across the sky? And see how the jet, streaking across the sky, shifts the cloud so that it now becomes a giraffe?

Yes, imagination is great. With it, you can be and do anything that you want. You can be the person you want to be, and most of all, you can get in touch with yourself. Too many people today are overstressed, overworked, and unable to afford to take a break. Yet, taking a moment with your imagination is almost as relaxing as taking a week’s vacation at a spa, but much less expensive. After all, using your imagination, you can go anywhere in the world, just by stepping into your backyard.

Want to be in Tahiti? Well, take a break to imagine yourself there. No, really imagine yourself there. Feel the warm sun baking your skin. Hear the waves washing up on shore. Feel the grit of the warm sand in your fingers as it sticks to the residue of sun block that you just smeared all over your body. Can you smell the coconut oil of the sunbather down the way? The gulls screech as they circle overhead, and the smell of salt water and fish waft to you on the gentle breeze that caresses your sun-warmed back.

As you feel yourself drifting to sleep, don’t forget to roll over in about 30 minutes, you don’t want to overdue the sun exposure.

Or maybe you’d rather go skiing in the mountains. Well, you can do that, too. See the snow reflecting brightly in the sun; better put on your sunglasses. The mountain seems a little higher than you first thought, isn’t it? And can you smell the crisp cleanness of the air with just a tang of pine? It’s cold just standing there, so better get up there so you can schuss you’re way back down. The snow is powdery, just the way you like it, and the conditions are just perfect. Ready? Skiies on? Then let’s hit the slopes!

So lose the stress. Take a break from technology. Unbutton the collar of your suit, and kick off the shoes. Let’s step outside and be a child again. Let’s use our imaginations and find out what it’s like to be alive again. 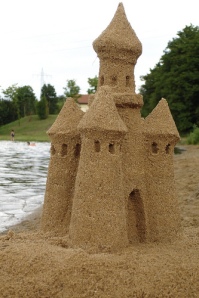 When was the last time you built a sand castle? Then let’s go to the beach and do it. You build one and I’ll build another, and we can even put a giant moat between them. Watch out…I think there’s a dragon soaring over. Crash! Oh no, the dragon has collapsed the tower of my castle…shall we don our armor and go after the dastardly beast?