Sliding Doors and Choosing a Path in Life 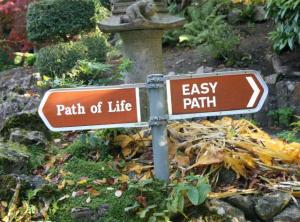 Have you ever started out walking down a path, and then halfway round you see another path wandering off through the trees and decide to follow it and see where it goes? I think we all have. And we haven’t actually followed that meandering path, we’ve at least seen it and wondered about it.Most times (at least in my experience), that path eventually finds its way back to the main path that you started out on. However, following that side path usually made for an interesting, and (sometimes) a very memorable, side trip.

Life is very much like that, too, although most of us don’t recognize that fact. We all start out with a goal to our lives (sometimes we know what that goal is, and sometimes we don’t…but it’s there, all the same). Some of us follow a straight path right to the goal; some of us take a more circuitous route; and others do a little of both. Eventually though, we all manage to reach those goals that we set out towards (though, sometimes it may take more than one life if the route taken is extremely adventurous and full of wanderings).

Think about it…how many times have you been going about your day-to-day routine, ensconced in your little rut of everyday life, when something happens to change things. That something can be so small and seemingly insignificant that you don’t even take note of it, or it can be something more notable, something that leaves a more lasting impression.

For instance, your alarm fails to go off and you over sleep. When you awaken, you can decide to just call in and take the day off, or you end up racing around like a mad person trying to get ready to for work. By staying home, you avoid the large 4-car pile-up on the road you normally take to work, and you get to enjoy a splendid summer day hanging out in the woods following that strange intriguing path. The other choice of racing around and trying to get to the office as quickly as possible, causes you to misplace your cell phone, misplace your customer file, and get caught up in the traffic jam to the point that you miss your meetings and are unable to call and reschedule anything because you don’t have your phone with you. Your customers are angry, your boss is angry, and you’re this close to losing your job.

Sometimes when these incidents occur we don’t even realize that we’re making a choice. Many times it seems as if life, fate, or destiny is simply stepping in and we have no say in what happens. But we always have a “say” in what happens to us, even if we don’t realize it, because all the while we’re following our path, our rut, we’re laying the groundwork for other paths to occur.

Every day we make thousands upon millions of choices. Most of these choices are (to us) inconsequential and we make them without giving them a thought. But each of these choices joins up with the choices made before until… wham! We’re on a different path. Yet, because we’re not paying attention to most of the choices we make, it’s as if we arrived on this new path magically. One minute we’re happily ensconced in our lives following our little rut, and the next we’re in a life we don’t recognize at all. Then we look around and wonder “How did I get here?” or “What did I do to deserve this?”, while all along we’ve been pushing ourselves to this point through the choices we’ve been making.

One of the best examples I’ve ever seen of this concept is the movie Sliding Doors starring Gwyneth Paltrow. Gwyneth plays a young woman whose life is rather unremarkable. She works at PR firm in the UK, lives with her boyfriend of many years in a relationship that is as bland as her life. For the most part, she’s content with things, and those few things that bother her…well, that’s just the way life is (or so she believes).

Her day starts as all her days do, and then suddenly it takes a left turn. Based on her choices to a series of seemingly ordinary occurrences, her life changes dramatically…or continues as normal. 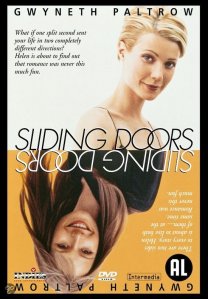 The movie shows us both versions of her life—the one that changed and the one that remained relatively unchanged. The movie runs the versions concurrently, as if showing us two different characters…and, in a way, she is two characters, because the two versions of her are very different. Yet, eventually, as the lives progress and the choices are made, the two versions merge back together.

The goal of most people’s lives is on their main path, and eventually all the side paths guide you back to that main path so that the main life goal is reached.  This is what eventually happens in the movie, too.

Sliding Doors is a great reminder that no path you take in life is right or wrong, because all paths get you where you need to be, and make you who you are.

An author, writer, photographer, and fellow life traveler who offers her wit, wisdom, and stories with others who share her path, if even for a moment.
View all posts by TA Sullivan →
This entry was posted in Paranormal and tagged choices, film, gwynethpaltrow, life paths, movie review, Parallel universe (fiction), Sliding door, ta sullivan, tasinator, tricia sullivan. Bookmark the permalink.

2 Responses to Sliding Doors and Choosing a Path in Life