DEATH – Why Does It Frighten Us So?

That word probably frightens people more than any other.

Because it represents the ‘great unknown.’ We know less about death than we do about outer space or the deep recesses of Earth’s oceans. After all, it’s not easy to explore a dimension or state of being that requires us to cease living. So, for most of us, death becomes the area that, like on maps of old, was marked with the words: ‘There be monsters here.’

These are what we think of when we think about death, because that’s all we know, or at least suspect, based on the stories that we are told about the land of beyond. Of course, some people eschew the typical concept of death being a place or a continuation of some form of life. Instead, they see death as a black nothingness. Still others divide the realm of death into two states: one where demons and monsters abide, and another where angels and cherubs live.

Of course, trying to prove if there is a type of life after the physical body dies isn’t easy to do. After all, how do you gather statistics and measurements when you have no physical form? It is just this conundrum that has plagued most of us who have died and returned. We have garnered little acceptance from the scientific community regarding our experiences simply because we lack the physical proof of what occurred. All we have is our memory of the events, and even those vary widely based on each person’s interpretation. For instance, for someone who is a strict Catholic, the experience may be interpreted through the filter of their Catholic iconography and tenets; while, someone who is an atheist may describe their experience using a filter of science or space aliens.

Some experiments have been conducted. They are usually of the sort wherein someone is forced into a chemically- or electronically-induced death, and then revived within the time limits deemed safe. While these experiments are done within the confines of labs and under the supervision of ‘specialists,’ the interpretation of what did or did not occur on the ‘other side’ (if indeed, the other side was even reached) is still up to the individual who died.

The specialists monitoring the physical side of the experiment can note data on the ‘traveler’s’ body—heart rate, brain waves, blood pressure, etc.—however, they are unable to experience what the traveler who died experienced. Scientists can site all types of speculation and theories to explain what may or may not have happened—low oxygen levels in the brain, random electrical pulses, or a bad interpretation of what was happening around the person who was ‘dead’—but without proof of whether or not the dead person actually traveled their suppositions are as bogus as their disdain of what the travelers experienced.

Having made the roundtrip at least once in this lifetime, I suppose that until we devise some sort of carrier to ferry us (the physical us) into the realm of death and back, we will simply have to rely on our own beliefs and truths as to what awaits us when we die.

To that end, I have written my interpretation of my experiences with the hope that they help people overcome some of their fear of Death. Death isn’t anything to fear. It’s merely another step along life’s path. 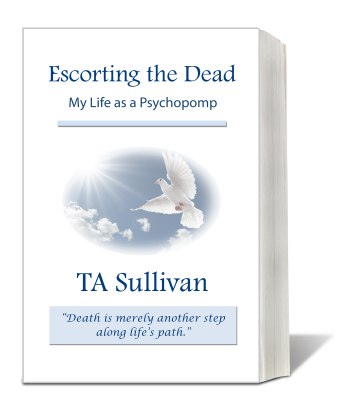 An author, writer, photographer, and fellow life traveler who offers her wit, wisdom, and stories with others who share her path, if even for a moment.
View all posts by TA Sullivan →
This entry was posted in angels, book, Metaphysics, out of body experience, Paranormal, spirituality, writing and tagged angels, astral plane, books, dark angels, Death, death and dying, demons, dying, NDE, NDEs, Near death experience, reincarnation, spirits, spirituality, ta sullivan, tasinator, tasullivan, tdgallery, tricia sullivan, writing. Bookmark the permalink.