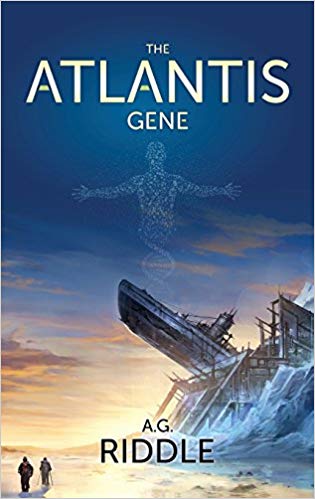 The Atlantis Gene by A.G. Riddle

Summary:  The Atlantis Gene is a thought-provoking technothriller about global genetic experiments, ancient conspiracies, and the mysteries of human evolution. Its complex characters and historical and scientific facts will stay with you long after you finish. This fast-paced adventure is the first book in A.G. Riddle’s Origin Mystery series.

Review:  This book has a great premise; however, it fails in every way to live up to that idea. What Mr. Riddle doesn’t have is a good grasp of story showing (he spends most of the book telling you what a character is feeling rather than showing you).

He also lacks characterization skills. Every character in this book is a shadow. They are flat, one-dimensional shadows that creep through the story taking direction from an inept story teller.

His initial male protagonist is a pale copy of every nerd-turned-hero that has ever shown up in a movie or book. And that character’s death was so foreshadowed that I almost applauded when the author finally wrote him out of the story. However, the author’s next choice of male lead was little more than a shadowy, poorly done Dirk Pitt (Clive Cussler has nothing to worry about, trust me). Meanwhile, the female lead was only a little better. The author seemed to have spent some time developing her, and at times she almost came alive. It was like watching her blink from black and white to color, and back again.

As for the antagonist, all I can do is shake my head. His actions were those of a psychopath, and his words were angry and full of hate, but there was no passion or depth to him. He, too, was a flat, pale shadow of every evil villain that ever appeared in a book.

Mr. Riddle tried to surprise us readers with several little plot twists. However, each one was cliched and so foreshadowed that there was no surprise.

While I understand this was his first book, it left me as flat as his characters.

He calls it an adventure, technothriller. I call it a confused mess of a plot with flat, uninteresting characters that isn’t worth the time or effort.

Will I read any of his others? Probably not.

Am I surprised at his success? Yes. (But then I’ve always said being a successful author has more to do with marketing than writing.)

He released his first novel, The Atlantis Gene, in March of 2013. It became the first book in The Origin Mystery trilogy.

Mr. Riddle grew up in the small town of Boiling Springs, North Carolina and graduated from UNC-Chapel Hill. During his sophomore year of college, he started his first company with a childhood friend. He currently lives in Raleigh, North Carolina with his wife, who endures his various idiosyncrasies in return for being the first to read his new novels.

No matter where he is, or what’s going on, he tries his best to set aside time every day to answer emails and messages from readers. You can reach him at: ag@agriddle.com

An author, writer, photographer, and fellow life traveler who offers her wit, wisdom, and stories with others who share her path, if even for a moment.
View all posts by TA Sullivan →
This entry was posted in book and tagged #amreading, books, Riddle, ta sullivan, TA Sullivan author, Tas Readings, tasinator, tdgallery. Bookmark the permalink.